A new EC regulation requires some tyres to have performance labels, with the aim of encouraging people to purchase tyres with superior environmental and safety performance, and also encourage tyre manufacturers to produce tyres whose performance exceeds the minimum requirements specified in EU Regulations.

This regulation requires that tyres manufactured from 1st July 2012 for cars, light commercial vehicles and heavy trucks and placed on sale from 1st November 2012, carry a label showing the tyre’s wet grip, fuel efficiency and noise performance. The tyre labels are similar to the labelling already in use for household goods such as washing machines and dishwashers.  Each tyre will be given a performance rating from A-G excluding D to avoid an average performing tyre. 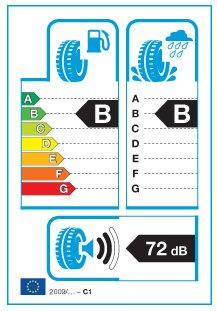 Some tyres, such as retreaded tyres, off-road tyres and racing tyres, are excluded from tyre labelling requirements.

Get a tyre Quote

Wet adherence, or grip, is one of the most important safety performance characteristics of a tyre.

However, higher adherence and lower rolling resistance are often contradictory objectives that have traditionally required a performance trade-off. Thanks to the new tyre labelling regulation, customers will be able to see and choose for themselves their preferred performances.

Vehicles with tyres from Class A stop in the shortest distance from 50mph, whilst tyres from Class B take an additional 3-6 metres. This trend continues for the subsequent values and results in an increase in braking distance of over 18 metres from a vehicle in Class A to Class F. It is key that this crucial safety value appears on the label to enable the motorist to have a fuller picture of the tyres performance. A label that only highlighted rolling resistance and noise could give a false impression of the tyres performance. For wet braking Categories D and G are not used so any tyre with longer stopping distances in the wet will be rated as E or F.

One of the forces influencing the fuel efficiency of a motorised vehicle is the rolling resistance of the tyres.   A tyre from Class C will use 1 litre more fuel than that of a tyre from Class B over a journey of 625 miles.

Traffic noise is an environmental concern. The new labels split tyres into three sound categories, based on the noise they produce in reference to new EU regulations, to be introduced in 2016.

What is an E-marked tyre?

An E-mark confirms that a tyre meets minimum EU or International (UNECE) standards in relation to its dimensions, load and speed rating. E-mark tyres have been tested to ensure adequate tread depth and performance ability.

All motor vehicles tyres in the EU must be E-marked, whether new or retreaded.

Here’s how to read your tyre in relation to E-marks:

Example of an E-mark and approval number

Road worthiness check of E-marked tyres
The check on E-marking of tyres is one of a number of new NCT test items introduced following the completion of a public consultation process in 2009.

What should I do if I have recently purchased tyres that are not E-marked?
It is illegal to fit non-E-marked tyres. If you have recently had tyres fitted to your vehicle that do not have an E-mark, the Irish Tyre Industry Association (ITIA) advises you return to the vendor with proof of purchase and request that they be replaced with the E-marked tyres appropriate for your vehicle.
When returning non E-marked tyres, the National Consumer Agency advises that you also consult the information provided on their website on the Sale of Goods Acts 1980 (PDF).

EU motor vehicle tyres must bear an S-mark “sound marking” that certifies that the amount of road noise produced by the tyre complies with EU or International (UNECE) standards.
Retailers can no longer sell tyres with a width of 215mm or lower unless they have an S-marking on the sidewall. From 1st October 2011, all tyres, regardless of width, will have to bear an S-mark to be sold. 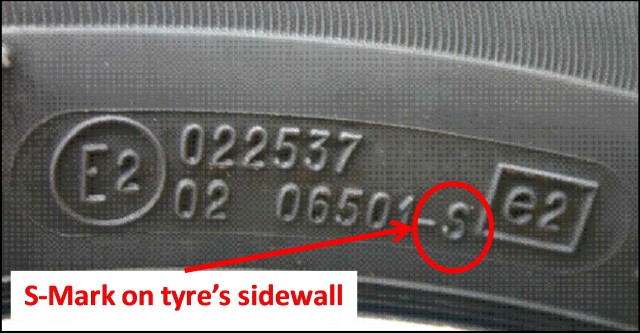 For further Information check out www.rsa.ie or email us by clicking here